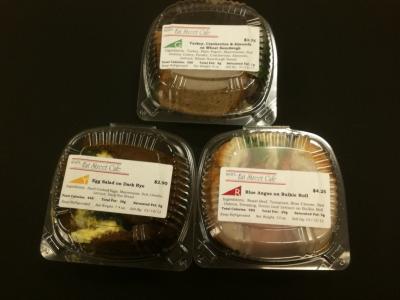 "We found that labeling all foods and beverages with a simple red, yellow and green color scheme to indicate their relative healthiness led patrons to purchase more of the healthy and fewer of the unhealthy items," says Anne Thorndike, MD, MPH, of the MGH division of General Medicine, who led the study. "We also found that moving items around to make the healthy items more convenient and visible led to further improvement in the nutritional quality of items purchased."

The study authors note that most current point-of-purchase efforts to encourage more healthful food choices focus on labeling the calorie content of food, which will soon be required for many restaurants and food service vendors as part of the Patient Protection and Affordable Care Act. However, calorie information is only useful if people read and comprehend it – which requires understanding their own calorie needs, accurately estimating serving sizes, and having enough time to consider and act on the information provided. Studies by psychologists and behavioral economists also have noted that individuals tend to maintain their typical behavior patterns and are more motivated by actions with immediate, rather than long-term rewards.

To find a simpler way to encourage more healthful food purchases, the research team – including leaders of the MGH Nutrition and Food Service – devised a two-phase plan. In the first phase, which began in March 2010, color-coded labels were attached to all items in the main hospital cafeteria – green signifying the healthiest items, such as fruits, vegetables and lean meats; yellow indicating less healthy items, and red for those with little or no nutritional value. Signage in the cafeteria encouraged customers to consume green items often, yellow items less often, and to consider other choices for red items. All cafeteria cash registers were programmed to record and identify each purchased item as green, red or yellow; and additional nutritional information was made available in the cafeteria throughout the six-month study period.

For the second "choice architecture" phase, which began in June 2010, displayed food items were rearranged according to principles of behavioral economics. This phase focused on cold beverages, pre-made sandwiches and chips – popular items likely to be purchased by customers who have little time to spend and may be more influenced by location and convenience. Cafeteria beverage refrigerators were arranged to place water, diet beverages and low-fat dairy products at eye level, while beverages with a red or yellow label were placed below eye level. The sandwich refrigerator was also arranged to put green items at eye level while red or yellow items were placed above and below. Racks of chips had yellow items at eye level and red items below, and additional baskets of bottled water were placed near stations where hot food was served.

At the end of the study period, sales of green items had increased significantly, while sales of unhealthy "red" items decreased. More specifically, during phase 1, sales of all red items decreased 9.2 percent – with red beverage purchases dropping 16.5 percent – while green item sales increased 4.5 percent, with a 9.6 increase in green beverages. In phase 2, red item sales dropped another 4.9 percent compared with phase 1, with beverages dropping by 11.4 percent; and while sales of green items decreased 0.8 percent in phase 2, sales of green beverages increased another 4 percent. A comparison with two satellite cafeterias where these measures had not been instituted revealed that these changes were much more pronounced in the cafeteria where the study was conducted.

"We believe this intervention was so successful because it was simple and easy to understand quickly. The labeling did not require any special skills and could be easily interpreted when a customer was in a rush," Thorndike explains. "The ‚choice architecture‘ intervention was much more subtle and took greater advantage of the convenience factor. Any of these strategies could be easily translated to other food service environments." An assistant professor of Medicine at Harvard Medical School, Thorndike adds that all elements of the program remain in place, with the color-coded labeling extended to other MGH food service locations, and future analysis is planned to see whether the observed changes are maintained over time.

Pic. 2: Before (left): sugar-sweetened soft drinks and juices were mixed together with diet beverages and low-fat dairy items. After (right): water, diet beverages and other healthy choices are placed at or above eye level (dotted line), while less healthy items are below. Credit: Mass. General Hospital Nutrition and Food Service