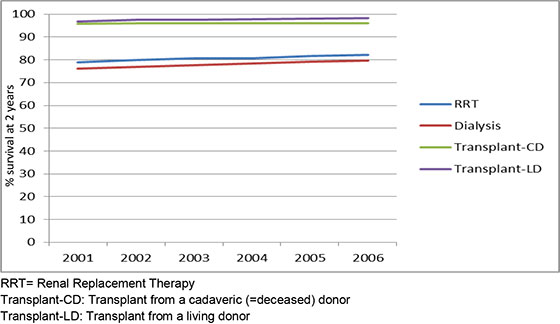 London, UK (May 27, 2015) – At least 70 million Europeans suffer from chronic kidney disease (CKD). However, dialysis patients represent only 1 to 2% of the CKD population. CKD is clearly a disease that progresses slowly, but steadily – yet even in its early stages, CKD causes a dramatic increase in general and cardiovascular mortality. The sad truth is that many CKD patients die before reaching end-stage renal disease (ESRD), when they are dependent on renal replacement therapy (dialysis, transplantation). Risk calculations indicate that CKD is a negative cardiovascular prognostic factor as such, irrespective of the traditional mortality risks such as cholesterol or blood pressure. Five years ago, a systematic analysis published in the renowned journal, ‘The Lancet’ [1], involving more than 1.2 million patients, showed that total as well as cardiovascular mortality can be well estimated using simple kidney function tests.


Patients who reach the ESRD stage have a poor outlook and suffer from high cardiovascular morbidity and mortality: Survival chances at the start of dialysis, one of the treatment modalities for replacement of severely damaged kidneys, were found to be worse than if colon carcinoma were diagnosed. For years, the efforts of nephrologists have therefore been directed towards improving the high mortality of ESRD patients. New data from the ERA-EDTA Registry now demonstrate that those efforts are paying off:

The two-year survival of patients starting renal replacement therapy (RRT) for chronic kidney disease (CKD), on dialysis or receiving a living-related kidney transplant increased to 82.2%, 79.7% and 98.3% in the 2006-2010 cohort (from 80.6%, 77.5% and 97.6% in the 2003-2007 cohort) respectively, while for cadaveric kidney transplantation it has remained stable (96.0-96.1%). “In other words, the two-year survival of dialysis patients increased by 2% within three years. That may not be earth-shattering as yet, but it is an encouraging signal. We may be cautiously optimistic of having a positive impact on patient outcomes with good nephrological care”, comments Prof. Alberto Ortiz, ckj’s editor-in-chief and author of a recently published article [2], in which the 2012 ERA-EDTA Registry Annual Report was analysed and interpreted. “But, of course, there is still lots of room for improvement!”

With more than 7,000 members, the ERA-EDTA ("European Renal Association – European Dialysis and Transplant Association") is one of the biggest nephrology associations worldwide and one of the most important and prestigious European Medical Associations. It supports basic and clinical research in the fields of clinical nephrology, dialysis, renal transplantation and related subjects. The ERA-EDTA supports a number of studies as well as research groups and has founded a special "Fellowship Programme" for young investigators as well as grant programmes. In order to involve young nephrologists in all activities of the ERA-EDTA the Council decided to create a Young Nephrologists’ Platform (YNP). Besides, it has established various research networks and different working groups to promote the collaboration of nephrologists with other medical disciplines (e.g. cardiology, immunology). Furthermore, a "European Renal Best Practice" (ERBP) advisory board has been established by the ERA-EDTA to draw up and publish guidelines and position statements. Another important goal of the ERA-EDTA is education: several series of CME-courses as well as the annual congress offer an attractive scientific programme to cover the need of continuous medical education for doctors working in the fields of nephrology, dialysis and transplantation. The association’s journals, NDT (Nephrology, Dialysis, Transplantation) and ckj (Clinical Kidney Journal), are currently the leading nephrology journals in Europe. The ERA-EDTA Registry is a large epidemiologic database comparing countries by assessing nephrology practice throughout Europe. Finally, ERA-EDTA is member of the European Kidney Health Alliance (EKHA), a consortium of renal societies that actively interacts with the European Parliament.