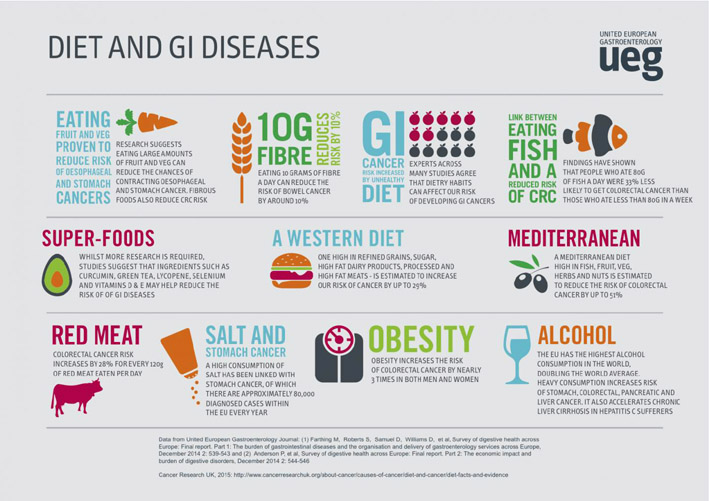 Barcelona, ES (October 26, 2015) – Experts speaking at the 23rd United European Gastroenterology Week (UEG Week 2015) in Barcelona, Spain today revealed compelling evidence of the link between excess body weight and risk of colorectal cancer (CRC). John Mathers, Professor of Human Nutrition from the Institute of Cellular Medicine at Newcastle University in the UK presented data showing an overall increase of 18% in relative risk of CRC per 5 unit increase in BMI.

Prof. Mathers said "There is now compelling evidence that improved lifestyle, particularly better dietary choices and being more physically active, can help to prevent obesity and this will lower bowel cancer risk". In addition, for those people who are already too heavy, losing weight may reduce their CRC risk but this is an area which requires further study. In his studies with Lynch Syndrome patients, Prof. Mathers observed that aspirin lowered the excess CRC risk seen in patients with obesity, perhaps through its anti-inflammatory effects. "This is a very intriguing finding" said Prof Mathers "which suggests that dietary and other anti-inflammatory agents might be beneficial in reducing CRC risk in people with obesity".

"Bowel cancer is strongly associated with age, obesity and diet – and is driven by inflammation", explains Prof. Mathers. "We can now give the public clear advice on the benefits of staying physically active, eating a healthy diet and avoiding weight gain to lower CRC risk as we get older".

UEG Week is the largest and most prestigious gastroenterology meeting in Europe and has developed into a global congress. It attracts over 14,000 participants each year, from more than 120 countries, and numbers are steadily rising. UEG Week provides a forum for basic and clinical scientists from across the globe to present their latest research in digestive and liver diseases, and also features a two-day postgraduate course that brings together top lecturers in their fields for a weekend of interactive learning.

UEG, or United European Gastroenterology, is a professional non-profit organisation combining all the leading European societies concerned with digestive diseases. Together, its member societies represent over 22,000 specialists, working across medicine, surgery, paediatrics, gastrointestinal oncology and endoscopy. This makes UEG the most comprehensive organisation of its kind in the world, and a unique platform for collaboration and the exchange of knowledge.

To advance standards of gastroenterological care and knowledge across Europe and the world, UEG offers numerous activities and initiatives, including: