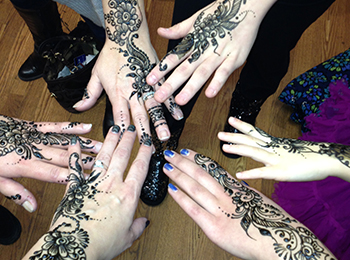 Temporary Tattoos May Put You at Risk

Silver Spring, MD, USA (March 25, 2013) – Spring break is on the way, or maybe summer vacation. Time to pack your swim suit, hit the beach, and perhaps indulge in a little harmless fun. What about getting a temporary tattoo to mark the occasion? Who could it hurt to get a temporary tattoo?

It could hurt you, if you actually get one. Temporary tattoos typically last from three days to several weeks, depending on the product used for coloring and the condition of the skin. Unlike permanent tattoos, which are injected into the skin, temporary tattoos marketed as "henna" are applied to the skin’s surface.

However, "just because a tattoo is temporary it doesn’t mean that it is risk free," says Linda Katz, M.D., M.P.H., director of FDA’s Office of Cosmetics and Colors. Some consumers report reactions that may be severe and long outlast the temporary tattoos themselves.

MedWatch, FDA’s safety information and adverse event (bad side effects) reporting program, has received reports of serious and long-lasting reactions that consumers had not bargained for after getting temporary tattoos. Reported problems include redness, blisters, raised red weeping lesions, loss of pigmentation, increased sensitivity to sunlight, and even permanent scarring.

Some reactions have led people to seek medical care, including visits to hospital emergency rooms. Reactions may occur immediately after a person gets a temporary tattoo, or even up to two or three weeks later.

You may be familiar with henna, a reddish-brown coloring made from a flowering plant that grows in tropical and subtropical regions of Africa and Asia. Since the Bronze Age, people have used dried henna, ground into a paste, to dye skin, hair, fingernails, leather, silk and wool. This decoration—sometimes also known as mehndi—is still used today around the world to decorate the skin in cultural festivals and celebrations.

However, today so-called "black henna" is often used in place of traditional henna. Inks marketed as black henna may be a mix of henna with other ingredients, or may really be hair dye alone. The reason for adding other ingredients is to create a tattoo that is darker and longer lasting, but use of black henna is potentially harmful.

That’s because the extra ingredient used to blacken henna is often a coal-tar hair dye containing p-phenylenediamine (PPD), an ingredient that can cause dangerous skin reactions in some people. Sometimes, the artist may use a PPD-containing hair dye alone. Either way, there’s no telling who will be affected. By law, PPD is not permitted in cosmetics intended to be applied to the skin.

You may see "black henna" used in places such as temporary tattoo kiosks at beaches, boardwalks, and other holiday destinations, as well as in some ethnic or specialty shops. While states have jurisdiction over professional practices such as tattooing and cosmetology, that oversight differs from state to state. Some states have laws and regulations for temporary tattooing, while others don’t. So, depending on where you are, it’s possible no one is checking to make sure the artist is following safe practices or even knows what may be harmful to consumers.

A number of consumers have learned the risks the hard way, reporting significant bad reactions shortly after the application of black henna temporary tattoos.

The parents of a 5-year-old girl reported that she developed severe reddening on her forearm about two weeks after receiving a black henna temporary tattoo. "What we thought would be a little harmless fun ended up becoming more like a nightmare for us," the father says. "My hope is that by telling people about our experience, I can help prevent this from happening to some other unsuspecting kids and parents."

The mother of a 17-year-old girl agrees. "At first I was a little upset she got the tattoo without telling me," she says. "But when it became red and itchy and later began to blister and the blisters filled with fluid, I was beside myself." She explains that as a nurse, she’s used to seeing all manner of injuries, "but when it’s your own child, it’s pretty scary," she says.

And another mother, whose teenager had no reaction to red henna tattoos, describes the skin on her daughter’s back as looking "the way a burn victim looks, all blistered and raw" after a black henna tattoo was applied there. She says that according to her daughter’s doctor, the teenager will have scarring for life.

If you have a reaction to or concern about a temporary tattoo or any other cosmetic, in addition to recommending that you contact your health care professional, FDA asks you to contact MedWatch, the agency’s problem-reporting program. You can also call 1-800-FDA-1088 to report by telephone, or contact the nearest FDA consumer complaint coordinator in your area.

This article appears on FDA’s Consumer Update page, which features the latest on all FDA-regulated products.

Temporary Tattoos Are Not Risk Free! A group of friends compare their temporary tattoos. The smallest hand (top right) belongs to a five-year-old who developed severe reddening (bottom) where the tattoo was placed. (Photos used with permission, by Keith Peterson.)